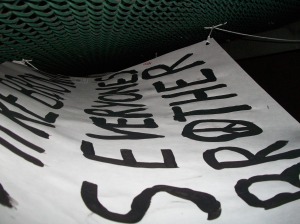 The death of unarmed 18 year old Michael Brown who was shot and killed by police has caused a conflict between police forces and  protestors in Ferguson Missouri, I’m sure you all know.

In light of the issue of  the several recent examples of police brutality, blatant attacks on freedom of speech, and racism, I decided to paint posters and put them on the freeway bridge.  I originally painted them, put them on the bridge and left, but I decided when driving pass them to take a few photos, so sorry they look pretty bad, it’s nighttime and I couldn’t get a good angle. But hey, it wasn’t meant for this blog to begin with.

I’m not in Ferguson Missouri, I’m in a suburban city in California. I wanted to express my condolences for  the family of Michael Brown and  I wanted to make a statement that in the end was cathartic for myself. I am a young black male, I have dealt with prejudices in my life as I’m sure all of us had, but in all I have had pleasant experiences with people of all races and have a pretty cultu100_2607rally diverse group of friends. I also have never had any bad experience with police officers despite growing up and living in a plethora of different areas in Southern California known for aggressive officers.  I don’t believe that “black America is under attack” as told by aggressive, riled up people, but I also don’t believe that “racism is over in America” as told by cynical, defensive, or ignorant people. This issue centers around a complicated relationship between minorities ‘predominantly black male youth’  and the police.

Racial profiling, policies due to the failure known as the War on Drugs, and yes black males own responsibility in committing a large amount of violent crimes in the country are factors in dealing with the issue between police and young black males. This is the center of the issue, not the media’s poor and ineffective attempt to rile up “racism” in the form of Al Sharpton with no real solutions. Tragic terrible things happen all the time as the result of misunderstandings, ego, and ignorance there are cases of people of all different races being killed accidentally by police. There is a case to be made for systematic racism, the complicated history, and the lack of ALL sides to hold responsibility for the state racial tensions are in not just in the country, but around the world.

The United States has progressed tremendously since the 1960s, but there are still issues of prejudice of not just black male, but Black women, woman of all colors, gay people, Muslim, atheists, white males, Asian people, Hispanic people, and many other groups. There are still systematic injustices in our system and because police are the enforces of that system, those injustices are reflected by them. Mix that with human aggression, prior prejudice, fear, and pride, you have what’ going on in Ferguson. A transparency for police investigations and police activity, sensitivity and retraining of all officers to better treat their fellow human being, and open discussion of race in our homes, should be in place to end police brutality. Growing up listening to punk and hip hop groups like MDC, Reagan Youth, Leftover Crack, Anti Flag, Tupac, Mos Def, Lupe, and others, I’m influenced heavily artistically and politically by those ideals and I want my art to reflect my gratitude for those artists.

I understand I am seen as black, but I see me being black is as relevant of a description of me as my eye or hair color. To end racism is the elimination of the concept of race. That doesn’t mean ignoring systematic prejudice and studies that show disadvantages of certain people like women or minorities. Labels do more harm than good. Michael Brown is everyone’s brother, not just Black people, or White people, or even Americans. The moment we acknowledge our unity as a human race, the moment we can deal with these issues head on and strip the labels. My art reflected that.

I am an artist. I am a human being who wants to love, learn, and listen constantly and be unafraid to express myself and I want the same for anyone else.

I urge anyone to never be unafraid to express yourself and take a stand in what you believe in.

The honks I got while posting them from the bridge were worth it.