As an artist I think it’s easy to fall into a rut. I see a lot of painters, musicians, illustrators, comedians- amateur and professional alike- who after a while, start preforming and putting out the same thing. Which is fine to a certain extent, everyone has unique backgrounds, personality traits, and influences which define their artistic components and that make them who they are. And once you have an audience and have a certain niche, it’s going to be hard to break away from that. Especially if said art puts food in your mouth hole.

And while finding your niche is important,  for me I like playing around with a lot of different styles, mediums, canvases, and concepts. I think it’s good to try it out. I’m 20 so I have a long way to go before I find out what makes me me. I’m constantly exploring and discovering new stuff I really dig, but I find myself going to the same shit I like to draw. Like ice cream, desserts, anime, manga, politics (look at my twitter and my attempt to be a activist behind a computer screen) , nature, animals and music.

Attempting to go outside of the aforementioned list is like doing a new exercise during your regular regime. It’s weird and you have no force it, but it’s the only way to make some variety in what you put out. (There’s the making of a poop joke somewhere in that sentence, but I don’t have the delivery to make it funny)

My point is, it’s easy for me to discuss trying to try out new things, and fearlessly going off the beaten path and experimenting, because I have an almost non existent online or offline following. So I could start using Hackxsack to sell ceramics of eggplant and no one would fucking notice. But being a business major and a creator of artwork, I feel a pressure to find a niche that works. But I’m not there yet and there’s no point in finding a trademark if I suck or don’t explore what works and what doesn’t.

But I think I’m going to keep scribbling until something sticks for me. Hopefully this applies for some of you readers

So I’ve been working hard doing new designs and artwork for the website that I’m hoping to open up on Etsy, Society6, Amazon, and possibly Big Cartel by the end of the weekend. I’m a community college graduate and an incoming university transfer student, so needless to say I need to earn some extra income. I figured I’d try to acquire as much currency as possibly during the summer.

I will be selling prints, original pieces, and even some extra goodies such as original photographs and skate decks. It will be an array of different items, and slowly it will be a bit more focused once I get all the kinks out.

In the meantime here is some what I’m currently listening to. It has the perfect mixture of ruthless instrumentals, poignant lyrics, and overall badassery that make a great hip hop album. 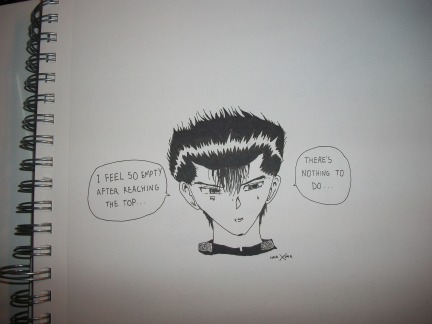 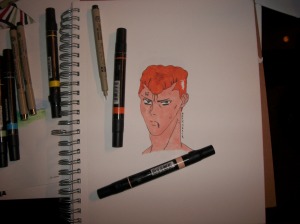 Kazuma Kuwabara from Yu Yu Hakusho! redrawn in black and white and in color. 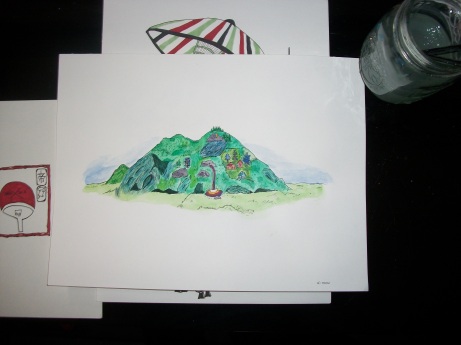 A painting I did using gouache, Prismacolor pens, and micron pens. The gouache had a heavy amount of water, which gave it a watercolor look to it.  This was inspired by one of my favorite artists, Gala Bent and math rock music such as Giraffes? Giraffes!, Redneck Manifesto, Toe, and other bands  whose names are too unnecessarily long for my short attention span to remember off the top of my head,

It’s no secret I have an afinity for Japanese culture. The left is inspired and essential a redrawn work of another Japanese artist I saw in a book and I attempted to redraw it and give it my own style. the right is an image of the Uchiha clan symbol from naruto. Both are used with Prismacolor markers and Micron Sakura pens.

So I spent my Saturday evening visiting three various thrift shops stretching from Rancho Cucamonga, Ontario, and Upland to make some purchases and pop some tags. Thrift shopping is not really a new thing for me or for anyone for that matter.

I did not grow up particularly rich, so I was use to going to thrift shops, old churches, or rummaging through hand-me-downs to find some outfits. And even though I can somewhat afford some new retail clothes, and don’t get me wrong I do buy new clothes, there is something really dope about rummaging through a bunch of stuff and finding a cool flannel or a Suicidal Tendencies T shirt for 2 dollars that no one else has. For me it makes my style and my outfits feel a bit more personal.

When I began working my first job at Hollister, which is anti-thrift for a number of reasons (it’s overpriced, the CEO has been quoted for wanting fat free clientele, it’s racy sexualized images of teenagers, it’s racist hiring and marketing practices, it’s comments on how it would rather burn clothes then have poor people wear them, I could go on) I  realized how ridiculous it was to buy something overpriced because it was a brand.

Cars, clothes, and industries have that sort market and make money off of using the class issue of branding. Buyers of overpriced items consist of rich people who want to show off their stature, people who deeply enjoy the aesthetic of the brand and the outfits, people with a sense of ‘brand loyalty’, and poor people trying to pose like they can afford the outfits and pretend to have the stature.

Macklemore’s “Thrift Shop”- a song about, individuality through fashion, the idiocy of spending insane money to purchase a mass produced unoriginal outfit- became a hit, hipster culture of vintage clothes and Tumblr was already pretty huge, and the trend of going to thrift shop to buy stuff began. While the average person does not go thrift shopping for clothes, the influence of the ‘thrift culture’ is strong. Big clothing companies began selling vintage-style clothes and affordable stylish clothing companies like PacSun, H&M, and Cotton On replaced clothing giants Hollister and A&F in terms of popularity.

Shopping thrifty is about more than buying old clothes from a kind like dead grandma and a bargain. A lot of stores, popular ones or obscure places, have lots of great deals. Old Navy is a place I recommend, even Hollister had a lot of great cheap deals at it’s outlet store.

But here is the stuff I bought and the kind of stuff you can also find at your local thrift store if you look hard enough.

I copped this polaroid camera for only twenty dollars, which is cheaper than the average cost of polaroid film. I don’t know whether that’s a good thing or not. My last photography series was comprised of 35mm camera film, which is an aesthetic I really enjoy. So instead of purchasing a bunch of disposable cameras, I bought a film camera from the thrift store for $1 along with the polaroid.

Music wise I bought three vinyl albums and two cds for my car. The Emotions, A John Denver’s greatest hits collection, and work from the Deele (a band which had Babyface and L.A. Reid) I also got Bob Dylan’s classic album Desire and Circa Survive’s “Blue Sky Noise” the album that first exposed me to the band, which I bought brand new at a thrift shop for $3 (side note it came with a poster and bonus tracks)

And clothing wise I got three shirts and a flannel to begin the summer. My point, don’t be afraid to do some shopping at a thrift store. It’s less wasteful, it’s cheaper, and you can find some unique finds.

I’ll have some more film photography up soon.

I had nothing to do with the spaghetti being placed on the floor. I passed this spaghetti for a few days.  This just seemed right. 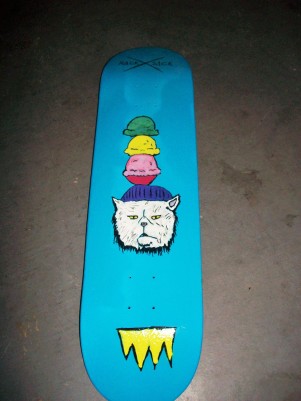 Skate deck art that a local rapper was interested in buying off of me. The medium used was spray paint for the background, paint pens for the artwork, and a gloss finish to avoid the skateboard art being chipped away.

I began skateboarding at around 11 or 12, which was about 8 or 9 years ago. I got a Big 5 skateboard, which I’m not sure if some of you know this, but a skateboard from a sporting good store or Wal-Mart are pretty low par. To give you an idea, skateboards costs about 38 bucks (the price of the average decent skateboard deck). Anyways, my skateboard skills never really improved because my skateboard could barely move let alone be do tricks. Now I’m doing artwork which is inspired by high school themes. This is an older picture from my behance page but it has now been turned into a usable skateboard, which can be seen here.

Besides drawing, painting, making photographs,  and currently working on skateboard designs and music, I also have an interest in fashion. The fashion editorial-style illustration I did is called “Chic As Shit” is a fashion line that contrasts between hipster, new-age style with a crust-punk, new-wave style. I decided to encompass my passion and interest in California, skateboarding, punk, vintage clothing, illustration, and colorful art into outfits made for women.